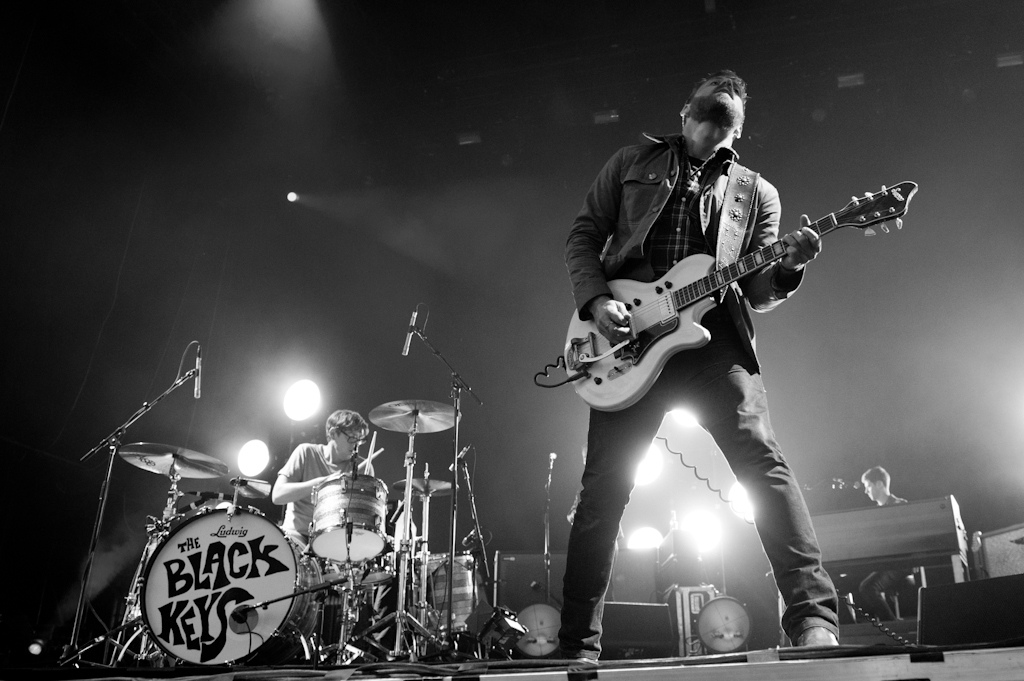 Well what can one say about the elation that you receive from such generous band? It was a rather chilly evening in Beautiful Byron Bay, rain would heckle the crowds all night, but never eventuate. The Hilltop Hoods opened the evening for me, playing a rather nice warm up for a powerful ending. Bernard Fanning played a solid show, but as his says, “Stick around for the Black Keys. They’re fuckin’ evil”. No more needs to be said about that.

I have been concerned of late in whether I have become obsessed with this band. An obsession that has caused me to be that guy who wears the shirt of the band that he is going to see. An obsession that binds me to tell everyone who ever loved music to either listen or see them to treat their soul. An obsession that leads me to believe that they will be the first and last of their kind. An obsession that leaves me wondering about what will become of music when they are gone. In all, the truth and intensity of the Black Keys and not to mention their generosity to give all they can, has to be seen to be believed. They really play music that can set you free.

As the introduction too “the world famous Black Keys” echoed through the tent, I broke away from the conversation with my fiancée, searched my pockets frantically for the illustrious joint whilst screaming with the others for their arrival. As they entered, my joint was alit and “Thickfreakness” exploded into the crowd. I noticed the sudden smiles on people’s face, that look of elation that one gets when completely pleased with every sound pulsing through their ear drums. Those that had never seen The Keys before where immediately addicted and where screaming for no other reason then that music allowed them too.

My recollection as you can understand is somewhat a little hazy after this point, I was immersed in every chord of Dan’s guitar, my head shook violently with every beating of Patrick’s drum kit, and all the time I was smiling for the good times had arrived. The set started out like any other Keys set, showing the audience what they can do, and how well they can do it. About four songs in, everything changed, the Keys where no longer showing us, they where taking us for a ride. Inside that crowd, it appeared that no one cared about anything, something animalistic broke out in both men and women, not in a violent way, but in an appreciation for the blues. Men and women screaming, whistling, yelling, jumping and swaying with every emotion played.

Dan would jump around the stage picking the pain from the guitar like a madman set free whilst Patrick beat the drums with every bit of blood that runs course through his veins. At one point, I swear I witnessed Dan sell his soul to the devil while Patrick welcomed it. Or maybe that was just the arrogance of the joint, who knows. One thing is for sure, The Keys are one band that are truly in their prime.

To list off the songs of the set I think would detract from what I am trying to say, and part of me just can’t remember. They played a lot of new stuff, a lot of old stuff and everything in between. Words cannot really describe the set as a whole; hopefully my recollection brings some idea of what it was like. When I asked my fiancée what she thought afterwards, between all the screaming and the accolades, she told me that in two years they had grown, that they had realised how good they are, and that takes their music to another level. She wasn’t saying that were arrogant or any such thing, simply, that they are getting the respect they deserve.

For me, the whole obsession I think comes down to the cultural void that we live in, and everything that The Keys have to offer. Maybe I am obsessed, but I know for sure I am not the only one. In all, this kind of blues is a religion.

Be Your Own PET