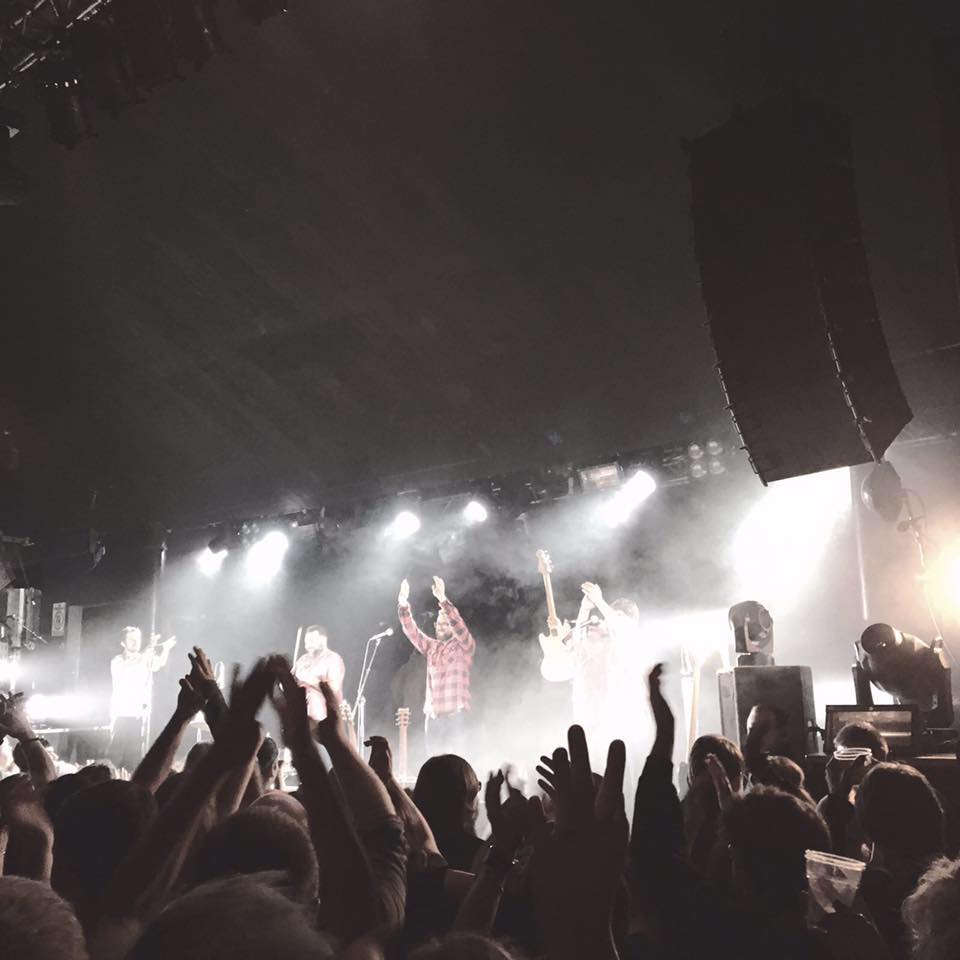 Can you introduce yourself and the band for the readers of Rockbeatstone please.

Wow… I’m going to stumble at the first hurdle…I didn’t expect to get such a grilling in this interview.

That is because we are very nice people. How did The Tailors start? Who had the idea and why did you feel that the time was right to start to write and perform music?

A couple of years ago I moved down to London from Leeds, where I had been opening for punk bands with a group called the Rusty String Breakers and hanging out at Greenmount Villa Studios in Wakefield where we just finished recording our album.

I was round a friend’s house, on New Year’s eve, and persuaded him and his flatmate to pick up their instruments again (drums and bass) with the idea that being good players is far less important than having some cool ideas and the right influences.

As far as I was concerned having two of my friends on stage when I played kind of justified me doing it, and I think Me, Dan and Jamie all saw the band as something to focus our time and energy on that seemed worthwhile. I guess it was our new year’s resolution that year.

You’ve been trailing the London pub/club gig-scene for a while now, what is the worst element of this? And the best?

When we started out, the idea of doing a gig was a novelty – having five or six songs to play to people and seeing how they would respond. As a result we would play some really bad nights. I’d say the worst thing about gigs in London is either the vampires who pay you a pound for each person who comes in to see you, or the woeful ‘eclectic’ nights they throw together. The best thing is realising that you don’t have to take part in any of this. People tend to contact us now and we can decide whether it is the sort of night we’re into playing at.

You have a ‘normal’ job on the side as well. Do you find this a benefit or a hindrance to The Tailors? Do you find that this focuses your efforts more?

The funny thing about working is you spend your time convinced that if you were at home you’d be the most fiercely creative individual on the planet. The truth is, whenever I’ve been unemployed I get to see a lot of films, eat plenty of cheese on toast and write really sub-standard introverted songs.

At the moment, my days are spent carrying a ladder around, and looking for asbestos.

I notice that you have recently undertaken a personnel change. How difficult is this to deal with? How did you go about getting new recruits? Was this because of creative differences or something less sinister?

Over the years we’ve had a few changes to The Tailors, but Losing Dan on bass and vocals was a real drag because he has a great voice. He just helped me finish the album up in Wakefield last week, and is still involved, but his other commitments made gigs and rehearsals impossible. Jamie switched to playing keyboards because he’s off to become a neuroscientist in Canada in September, but we’ve roped in Eddie from Alabama 3 on drums, and our new bass player Sam is a friend who runs one of the guitar workshops on Denmark Street [famous London street which has many musical instrument shops – Ed]

I’ve experienced your music live and can see a large Wilco influence. Who would you say your other influences are? What is the one song that you wish you had written and why?

My friend Will Burns (from a band called Treecreeper) has been a bit of a mentor to me since we first started playing each other country and folk songs when we were sixteen. Through him I got into people like Evan Dando, Paul Westerberg and Robbie Fulks. Colin Gagon in his EZT incarnation has to be one of the most underrated artists around and everyone should check his album Goodbye Little Doll.

I wish I’d come up with ‘Only Him Or Me’ by Townes Van Zandt because of the line “heaven is how she is, rain falls and rivers flow” The whole song is haunted by this sad inevitability – that loving and losing someone are inextricably linked and the passage of time is the only dependable and constant force.

Wow, poetry in motion. Although I hate adding labels, your music is very much alt.country (whatever this means). How do you find that this has gone down in London? Do you think that you would have had more success if you were a Libertines clone band?

I think a lot of people have enjoyed seeing more unusual instruments like pedal steel guitar, banjo and violin, but it’s hard to find an audience that engages with it as more than a novelty. When we play at places like Club NME or the Barfly, there is a temptation to resort high tempo knee-slapping songs that make people wake up, but artistically these are not really what we’re trying to get across. To tell the truth, the alt. country (whatever that means) scene is not what we’re looking for either. We love country music, but I’d like to think that it informs the kind of songs we make rather than completely defining them.

I don’t think we could have been a Libertines type band – it wouldn’t have really rung true on any level.

Does it annoy you when you see bands who clearly have less musical ability and song craftsmanship than yourselves have commercial success?

Not really. Something I’ve learnt is to enjoy is the process of writing and performing music rather than dreaming of some kind of elusive higher state that fame and fortune might afford. If you don’t like what you’re doing now, you going to really hate doing it every night to pay off a mammoth debt to a record company.

What bands that are now enjoying recent commercial success do you appreciate?

Two Gallants are pretty cool, Brakes are always amazing live and I’m glad to see that Absentee are in ascendance at the moment. I was pretty excited when our friends The Research went off to record with John Macintyre in the same studio as Wilco in Chicago, too.

Have you considered packing up shop and illegally entering the USA to play gigs there? Seriously, do you think that had you’d been born in the States that your music would be more eagerly accepted?

I think we might do OK on the college circuit if we got a song on a Smallville or The O.C.

Ha! Says, it all really. You released a single last year. How did that go and do you have any other releases or plans for recording sessions coming up in the near future?

We did a single with Trash Aesthetics who put out Bloc Party, The Rakes, Tilly And The Wall and Bedtime For Toys and it sold out in a month. We got some good press as a result of it, but at the time we were still working out what we were trying to achieve and so took a few wrong turnings with management and gigs. Luckily Rob at Trash Aesthetics is a fan of our music, and has continued to support us. They are putting out our album Wakey Wakey in autumn and a limited single in a couple of months…

What do you think about the illegal downloading thing? How do you think that this impacts on smaller bands, like the Tailors.

I think it means people hear your stuff more easily, but maybe treat it as more transient and less precious. I’d rather have a guy from Austin write to me and say he heard my stuff for free and liked it than have a pound more in the bank.

You organise a regular club night, ‘Sadder Days’ at the Windmill in Brixton. How did this come about and how is this part of your plan for world domination.

I used to run a night at Nambucca on Holloway Road called Heartworn Fridays, which had some great bands on. When The Windmill asked if I would like to do something down there with the guys from Treecreeper, it seemed like a great idea. We take it in turns to curate the night, and get to play with artists we’re all into like Jeff Klein, By The Fireside, Alan Tyler, Brakes and Actress Hands, plus there’s a party atmosphere because people come to meet up over a shared love of roots, rock and the spaces in-between.

Do you find the competition element of playing with other bands at ‘Sadder Days’ of help to you?

I think it reminds you what you are supposed to be doing and keeps you on your toes! I honestly think it is inspiring rather than intimidating to play alongside people you respect, although I think I’d have a nervous breakdown if I had to share a bill with someone like Guy Clarke or Lyle Lovett. In the past The Tailors have played with bands and I’ve thought: “these guys are absolute crud and yet people are loving it”. It’s far harder to know what to do in that situation.

What other bands that you have witnessed or played with can you tip for success?

I wouldn’t be surprised if My Sad Captains took off this year because they’ve got a great sound. Frank Turner’s endless touring seems to be deservedly winning an army of fans, and I also reckon Royal Gun are destined to blow up thanks to James Walbourne’s guitar wizardry. If there’s any justice in the world more people will discover and come to love Don’s Mobile Barbers as much as I do.

This is a question for the ladies. I noticed many of them looking at you with adoring puppy-dog eyes at the concert. Do you wear pants or boxers?

I find a vacuum formed Perspex groin sheath is all I require in that department and it goes in the dishwasher too. My uncle told me underpants are for old men.

Finally a question we ask many of our interviewees. What is your favourite Bob Dylan song (be careful our readers will be able to psychoanalyse you based on your answer)?

That’s a good choice. Many thanks Adam for your time and good luck for the future.