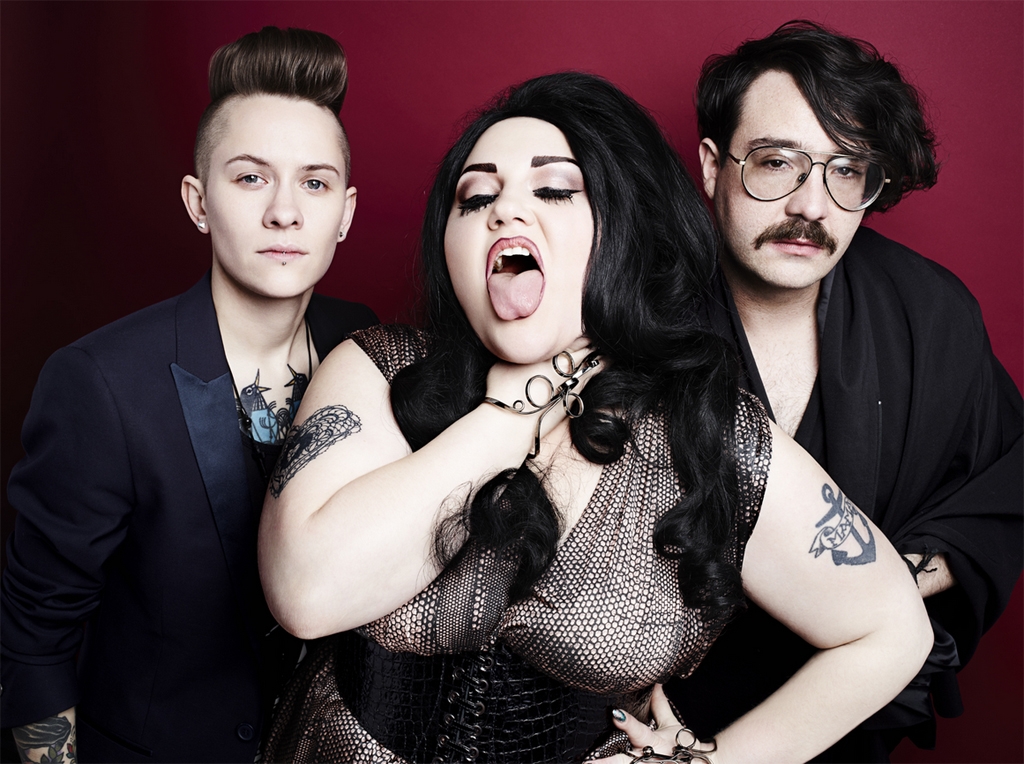 You are in the middle of your biggest tour you´ve ever done, how is it going?
Very good, nothing bad has happened, except for Nathan who had his wisdom tooth pulled today, so he feels is very sick.
Nathan: I’ m fine [sounds really sick)

You are going to visit some new countries, like for example Spain, are you looking forward to it?
Yes, we have never been to Spain and all we’re talking about is Barcelona, we’re all very excited about Barcelona, I don’t know much about it, just that there is a lot of things going on there. Last time we were here in November and everyone was like “Berlin, Berlin, Berlin” and now everyone is going “Barcelona, Barcelona”.

About the new album, you can appreciate that it has a new sound, do you think that is because you got a new drummer or because you have been getting new influences in the last years?
I think you are right, I think is new influences, new drummer for sure, more money to make new records, because Kill Rock Stars is actually giving us more money to make records, I think is all those things.

Why did Kathy leave and why did you choose Hannah to be the new drummer?
Kathy left to go to school and Hannah just had played in a lot of really good bands, a lot of our favourite bands, we have known each other for a long time and she just came around one day and we definitely thought we wanted to have her.

Did you for a moment think of the possibility of ending the band?
Well, it’s going comes back and forth, I think I thought about it before because I’m not very good in keeping jobs. But I think all of us will always do something in music or art.

Have you thought of adding more members maybe for the live shows?
No. Well, we do have thought about it, but we usually play one or the other either bass or guitar live, never together, so we did think of getting a pedal that loops it. We talked about having a couple of other people play bass or guitar of some sort, too.

Why did you choose to move to Olympia from Arkansas?
Kathy had moved from Arkansas to Olympia to get to school again. She was older then the rest of us, Kathy was 20, maybe 19. Me and my friend Jerry were 18. So Kathy said “I’m getting out of here” and Olympia was the place she chose because she liked the school there. You know, we heard about Olympia but she was really into it, because she knew more about the place. Then Nathan moved to be with her, then my friend Jerry moved to be with him and I moved to be with Jerry.

But then you made the EP Arkansas Heat? have you got a kind of nostalgic feeling towards it?
Our first EP was a 7-inch on K Records in ’99 and it was just called “The Gossip“. It was pink and black. That’s the very first one, it’s really little.

But the Arkansas Heat EP, did you do it because you have a kind of nostalgic feelings towards Arkansas? Would you like to go back?
I know I would never want to live down there again. Well, Arkansas is a really interesting place, it’s where Jonnhy Cash is from, there’s a lot of history and roots. But there’s also a lot of things like racism and the Bible Belt. You know, the Bible Belt is this line that extends the Mason-Dixon line. It runs through the US and below that line people are very conservative, right-wing, and Christian. Above it, it gets a little better. Nathan and I, and even Kathy grew up in the Bible Belt where it’s really oppressive and repressive area. The Arkansas Heat was like recognizing where we’re from and setting us apart from Detroit, like the White Stripes there, and from things that were from New York and L. A. But we were actually from the South, we actually lived this one kind of life, and we put up with a lot of bullshit. It was about how we were just so Arkansas. We survived, we made it, and we’re the people that we’ve grown up into being. I guess it’s a little nostalgic too.

Did you also make music there?
A little bit, but not the gossip. The gossip didn’t start until Olympia. I did sing, I was in a tiny little punk band when I was 16. Nathan was in a couple of little punk bands, too, and all the bands played together. I mean, our county was like a thousand people. So we would have some shows in the park, our friends would come down from bigger cities and there would be like ten of us. Yeah, we played in crappy little bands.

Which other kind of art do you practice apart from music?
I make a lot of clothes, I sew a lot. I’m always in the process making something and then I get distracted or I don’t feel like I’m good enough at it to keep doing it. So I would quit what I’m doing. But, yeah, I make a lot of clothes. Nathan makes a lot of art, he does a lot of writing and drawing, and he makes records with other bands. Hanna is in another band called Shoplifting.

And as a cook, which is your speciality?
Yes, I am a cook, and Hannah started cooking recently, too. My speciality is chicken and dumplings. That’s a very Southern, American meal with corn bread. And another one of my favourite recipes is cheesecake. Then again, I’ll eat almost anything.

Kim Gordon from Sonic Youth designed  your 12″ together with Nathan, can you talk me about that?
They made it together, Nathan asked her if she would help us with the artwork and she agreed. I don’t really know the story because I’ve never been in touch with her.

You have toured with Sleater Kinney, Le Tigre, YYY´s… is there any new interesting band you would like to have now in your tour as opening band?
We all really love Long Blondes and we always say it but we all love Les George Leningrad too. They’re coming here actually, they’re doing festivals. And we love Tracy in the Park and we love Peaches too. She’s got a new album and I am on it. That song probably won’t be a hit at all, but I’m honoured that she kept it. I didn’t think it would make it on the record. It doesn’t sound like me at all, though.

Do you gossip a lot in real life?
Oooh yeah, it depends on who you are.
Nathan: oh we do a lot.
Yeah, I guess we do talk a lot within the band, but we don’t hurt anyone feelings.

And lastly, what is your favourite Bob Dylan song?
I don’t really have one, but I guess something famous like “Blowing in the Wind”.