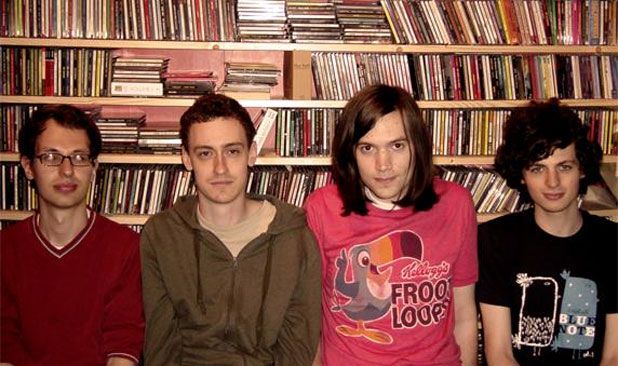 It Hugs Back are the new musical sensation from Kent. Not since Keane has anyone been excited about a band emerging from the self-titled Garden of England (only joking about the Keane thing).  They have had a busy year recording sessions for BBC Radio One and playing some of the UK’s most critically acclaimed festivals.  Their new single ‘Carefully’ is out now on Too Pure and the band will be joining Rockbeatstone for our now legendary gig night at the Windmill on Friday October 5th 2007.  We met up with Matt and Jack from the band to ask them a few questions…

You’ve had a busy past few months playing a session for Radio 1’s Rob Da Bank and releasing your new single? How have you felt about it all?
Matt – It’s been great! Little time to think too much, all very exciting…

I really like your new single ‘Carefully’. What was the inspiration behind the song?
Matt – Inspiration? It was written a good few months back now, I do remember writing it though! It’s just a little hypothetical story, nothing to literal is involved. I’m not sure there was a main inspiration as such to be honest! I just enjoy writing and enjoy seeing what comes whenever it comes!

You’ve played some festivals this year (including Bestival and End of the Road). How did that feel? You must have been playing to more people than you’re used to! Was it nerve-wrecking? How did people respond to your music?
Matt – It was fun, festivals are quite different to playing indoors. The sound can’t be the same, it’s impossible to get it to travel without being really loud and compressed and it’s always a bit hard to get used to but they’re fun in a different way to normal. It was nice playing to big crowds but Bestival in particular was quite hard for me as we played at 11 in the morning and I’m not usually awake then, let alone ready to sing!
Jack – It’s always nice when, during the rest of the festival, people come up to you and say how they enjoyed your set.

Did you do anything different for these shows? Or was it merely more of the same, just up on another level?
Jack – Well, we had to improve our car packing skills – fitting in sleeping bags, tents, clothes as well as instruments and amps!

Did you hang around backstage in awe of the main draws? Did you get to meet any musical heroes?
Matt – Mmmm, we did meet Ros from Electrelane at Bestival, they have released one of the best album this year so that was very nice! We were stood about with the Beastie Boys while they were kicking up a fuss over the “unsubstantial” catering but they’re not really musical heroes so it doesn’t quite count…
Jack – We did catch a glimpse of Suggs though!
Matt – We did! And the others in the band! But I haven’t a clue of their names?

You must be doing something right as you’re supporting Euros Child at Kings College. How did this come about? Are you fans of his work?
Matt – I haven’t heard him solo actually. I remember hearing some Gorky’s Zychotic Mynci on the radio a little and enjoying that a while back, it will be good to hear him play.

What are It Hugs Back musical inspirations? What is the one song you wish you could have written?
Matt – I’d like to have written the simpsons theme tune. I wish Jack had written ‘Mr Tough’ by Yo La Tengo.
Jack – Haha, but then I wouldn’t enjoy it nearly as much as I do. I wish I’d written Jim O’Rourke’s ‘Answers to Your Questions’, off of the latest Loose Fur album, Born Again in the USA.
Matt – ‘Let’s Go Away for A While’ by the Beach Boys also. I love that song.

What’s the most amazing gig you’ve ever seen?
Matt – That’s a tough question! Possibly NRBQ in Hartfort, Connecticut with the Sun Ra Horns on a really sunny summer afternoon or the same band on a boat in New York harbor late at night, traveling around the Statue of Liberty.. there’s lots of other possibles too!
Jack – Paul McCartney was amazing at Earls Court, and Brian Wilson performing Smile at the Royal Festival Hall was definitely a special moment, but obviously these weren’t the most intimate gigs ever. Seeing Yo La Tengo play at the End Of The Road festival last week was pretty spectacular – plus they played ‘Mr. Tough’.
Matt – ‘Mr Tough’! Hearing and seeing Pet Sounds live from start to end for first time of hearing it in its entirety was very very inspiring and memorable.  That would have to be up with the best too.

Do you have any tips for small bands you’ve seen or played with that might/should make it big some day?
Jack – I really enjoyed seeing The Rosie Taylor Project play at the Windmill in Brixton. They’re from Leeds and have just released their first single. We also saw Lupen Crook play a mainly solo gig at Wye Fayre, and I thought he was brilliant – strangely charismatic. I hope they both do well.

You’ve been doing the unsigned/indie circuit in and around London for a while now. What’s the hardest thing about this? Do you find it difficult to get people to shut up and listen?
Matt – I’ve never really thought about any hard things. I’m thinking but not much is happening! We’ve only been together for just over year and a half.  It is nice to play out of london, it can often be noticeable how different the audience is. There is definitely something quite fun in the adventure of setting off and going to a town we’ve
never been to before to play.
Jack – It can be off-putting when you hear a lot of talking, especially as we’re not one of the loudest bands, but there are always some people listening – I hope!

Do you all have day-jobs? How does this impact on your music? Do you look forward to the day where you can ditch the jobs?
Matt – We’ve never had jobs and I’m very happy that we’re doing well avoiding them!

How do you feel about the whole internet downloading thing? How does it impact on a smaller act such as yourselves?
Matt – I’m not it’s too much of an issue, I think it’s important people pay for the music they want, I’m yet to download music so it’s hard to totally understand, its hard to see why you wouldn’t want a record or CD over a file in a computer! It is a nice thought to think someone wants to listen to our songs by any means.. so maybe for smaller acts
it could be of benefit?
Jack – People have always shared music one way or another and I think people will always want to support the artists they enjoy listening to, perhaps more so when those artists are less established. Plus, records and CDs sound so much better!

What does the immediate future hold for It Hugs Back? Have you got an album coming out soon?
Matt – The immediate future is more touring, writing, rehearsing and recording! Our third single is out just before the end of the year through Too Pure, a label we’re very excited to be working with…

Why should people come and see It Hugs Back?
Jack – Ermmm… to avoid watching too much TV?
Matt – Except for Neighbours, of course.

Finally, what is your favourite Bob Dylan song? I can’t remember why but I ask this question of all interviewees!
Matt – It’s a good question! Very hard to choose just one, two come to mind straight away, either the little obvious ‘She Belongs to Me’ or the little more obscure ‘Standing in the Doorway’ from Time Out of Mind. His latest record is pretty great too isn’t it?
Jack – I really love George Harrison’s version of Dylan’s ‘If Not For You’, on All Things Must Pass. A bit of a cop out, I know.