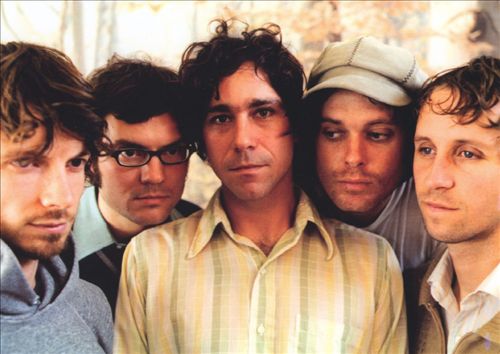 This is your first time in Europe as a band, how are the people treating you here?

The tour is going really well. We were looking forward touring Europe and we are meeting all the expectations. The response has been great. They treat you really well here. In America when you play in a venue, it’s almost as though they were doing you a favour, whereas when you get here they got snacks for you, they put you up in hotels and it’s like you are the only host for that evening.

Which other countries are you visiting apart from Germany?

We are just visiting Germany and Austria. It’s a 3 weeks tour but we’ll come back in September and I think we’ll do also Italy then.

How did you choose the countries you are visiting?

Our record came out in Germany 5 months ago and it just makes sense to tour in the regions where your album has come out.

Your first show was in an art gallery, are you interested or do you practice other forms of art apart from music?

Well, Steven and I moved to LA and there we met Alex, our bass player at that time. We started writing songs together and started recording those songs on 4 tracks. Then this lady came across, heard them and asked us to play in her art opening. I had moved to LA to become a film director, and I didn’t have any aspirations to do music, but we played that show and it was one of those stories where there’s art people and managers and we were getting management right on the spot. They bought us microphones and instruments and we got our first show in one big LA club a month later. So that’s how we decided to become a band.

You are now quite big in the US, I guess?

Well, it depends, in certain places, but I wouldn’t say we are, I mean, we are not Modest Mouse.

Oh yes, but I mean, you have already two records there you have people who know your songs and can sing them at your concerts

Yes, we have two records and one EP; we’ve been on MTV…

And how is it having to start now again and do all the promotion and that kind of stuff?

And how is it in LA? Is it especially difficult to have success as a band due to the big business and the competition?

There’s a place in LA called Silver Lake, it’s very famous in America, it can be compared with Williamsburg in New York, and that’s where all those bands came out, it’s like indie LA scene. I think that this city is a huge melting power, everyone moves there from all over the country and from all over the world to get in the entertainment industry, whether be film or music, so it’s very competitive. But we have a strong core group of friends so we feel comfortable and we’ve been doing well in LA.

Can you tell me a little bit about Elephant Six?

We are not a part of Elephant Six, we are part of The Ship collective, which has bands like Let’s Go Sailing, See Wolf… Elephant Six is also like a collective, a group of bands who are friends and they are playing in each others bands, they record each others music. They are separate bands but help each other. We started our own collective with the same idea, but we have not only music bands on it but also visual artists and photographers.

Who did the covers of your CDs? Has this horse repeating in all of them any meaning?

The art was done by Max Miceli she made a miniature horse and she used to carry it everywhere she went, but it is a kind of meaningless, like dada.

I heard that for you the lyrics are more important than the music, is that true?

On this album the lyrics came from a breakup, but we didn’t want to do a sad and depressing album, that’s why the music is happy. When something happens in your live it’s hard not to write about it because that’s what’s in your mind at that moment. But we like to laugh of our misery, we don’t want to take it so seriously.

All the members of the band are songwriters and I guess you are always getting lots of songs, how do you decide which ones you want to record?

For our first album we had 75 songs to chose from and there’s a couple of different factors, one factor being how songs fit well together in one album, because we don’t want to be too eclectic, another factor the lyric content and the third factor is just being a good song.

Which are your future plans?

We just signed a deal for Australia and for Italy and we just got distribution in the UK. We are releasing an EP which covers of Syd Barrett, The Thermals, The Ronettes, Bruce Springsteen and we are also almost done with our third album.