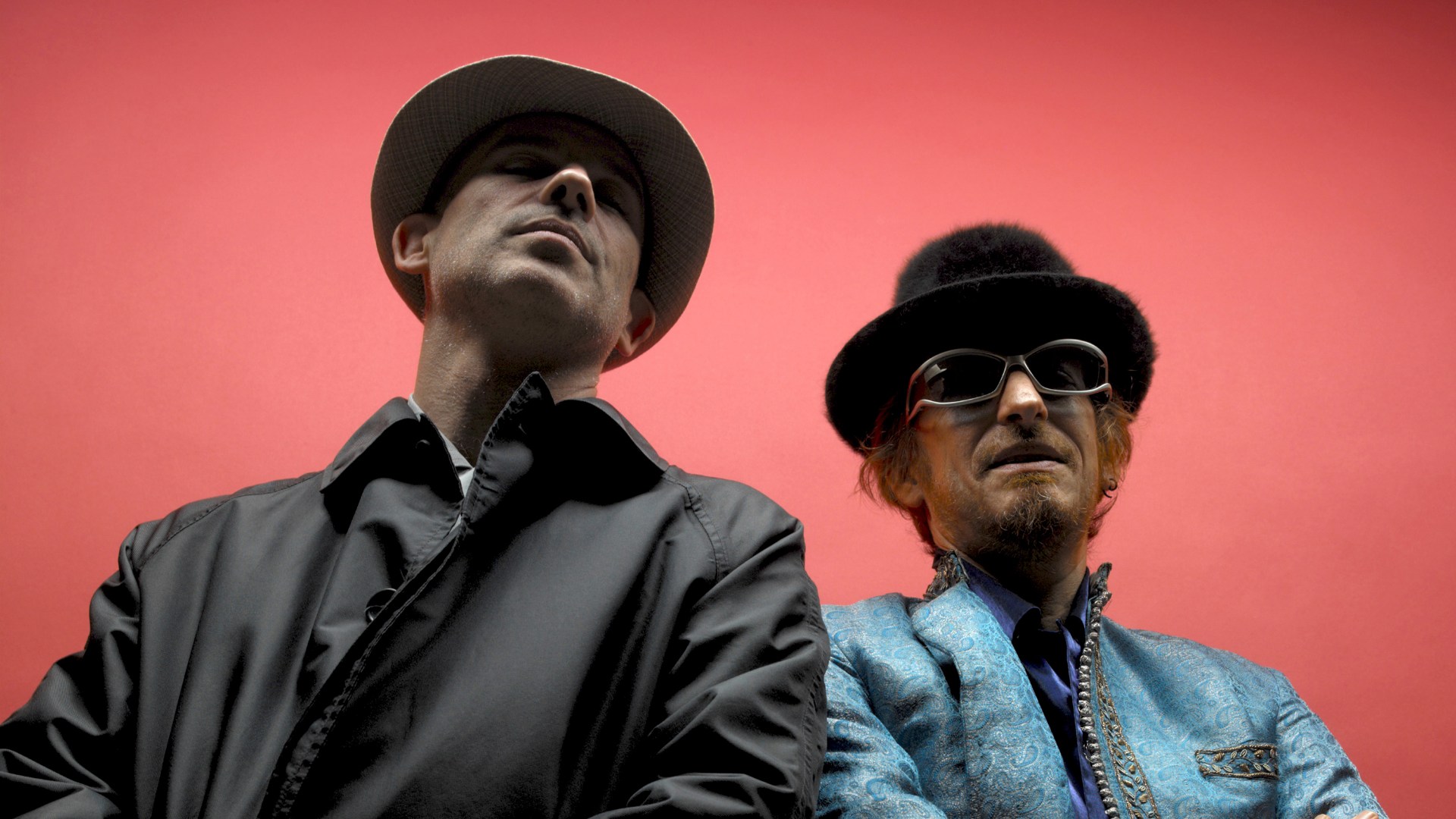 Coldcut have been around for more than 2 decades, and in that time they have amassed an impressive back catalogue of some of the most interesting, avant-garde and funky beats ever committed to vinyl. Today, they are a couple of middle-aged scruffs with a mission. Over the past few years they have pioneers the expansion of the very concept of being a DJ/producer by creating awesome visual spectacles that form part of their live show. Their new album Sound Mirrors was a slick piece of work, which was generally well received, and proved that they still have the talent where it counts. We caught up with Matt Black and Jonathan More before a set in Berlin.

How are you?
Good. Just checking if any bits have fallen off. Oh, I’ve lost an arm, but still got the right one to scratch with. So, good.

Tour going well?
Yeah, it’s getting there. Improving things as we go, and it’s interesting getting back on stage again. We’ve been getting a great reaction actually. When we did the ‘Let us Play’ tour the audio-visual thing was all very new to people, and that blew a lot of peoples minds, and we got a lot of love for that. And now there’s a lot more people doing it, but we’ve kind of amped up what we’re doing as well, taking it to the next level, and we’ve been getting a greater live reaction from the crowd than ever before, Especially with tracks like ‘Everything is Under Control’, which has got that rock energy to it.

The new album is very varied. Did you have a fixed idea of how it was going to look when you went into the studio, or was it a more organic process that took place during recording?
Very organic. We had various different ideas as it progressed from an instrumental album though to what it became, which is an album with quite a lot of vocal on it. It was really just a question of making tracks until we had enough good ones that we wanted to put together in one form or another, that also suited each other and worked as an album.

So you tend to think of it as one album, rather than 12 tracks put together.
I think it is one album. That was part of the idea when we were making it. This question of focus and cohesion came up and we addressed this in a Coldcut way, which isn’t necessarily straightforward. It’s sometimes hard to know where to draw your focus to, for instance, compilation albums are a lot more popular that they used to be. There are some great compilations around. If I want to get some reggae or funk, there are some great selectors who put together superb compilations on Soul Jazz for instance. And then there’s mix albums like ‘Journeys by DJ’ and with a mix album you can obviously cover a lot more musical bases. But then, we’re DJs who are producers as well, so when it came to make a Coldcut artist album, we didn’t want it to sound like a compilation of other people’s songs, it’s got to be Coldcut and it’s also got to be a musical journey. So I guess it’s a mixture of those three types of albums.

What made you choose the particular artists you collaborated with on this album?
They each represent a slice of the musical styles that we’re into, which is reasonably diverse. We like a lot of different sorts of music, from rock to techno to reggae to gogo and everything else really. We haven’t yet met the one singer who can actually front all those different styles with an authentic character. So we mix and match people like we mix and match records, although people are more interesting.

Do you think there is one singer who could front all those styles for you?
In the whole world? I think there probably is, and they may just be coming up now. In the past things were a lot more stratified and regimented. With all respect to very accomplished geniuses who can cover different musical styles, but generally if you think of the greats, like Bob Markey, you think of reggae; you think of James Brown, you think soul. But in today’s mixed up world where genes and culture have got a lot more hybridized than they were before, maybe the mixed medium is coming up now.

So you think you may work with a genetically modified singer in the future?
Absolutely. I think that a fascinating yet frightening thought and it leads on to the whole notion of genetic modification a cloning, which is probably beyond the scope of this interview.

I think so too. Let’s move on to vJamm, the software you are involved in producing. How is that going?
Very well. VJamm is real time audio-visual composition and performance software. We’re now at version 3 which is a lot more sophisticated a powerful that the simple version 1 which stared out with nearly 10 years ago now. We’ve also been involved in the development of FreeFrame, which is the equivalent of the VST standard for audio-plugins, we’ve helped develop the FreeFrame standard for realtime video effects. It’s the first thing of its kind. We use the same clips in the show that are in the demo on the CD, so people can have a go at being a 21st Century rhythm jockey, and see if they can do it better than us. Which they may well be able to.

If you hadn’t founded Ninja Tunes and simply gone through the corporate music mill, where do you think you would be today in comparison?
I think we would probably be fighting some kind of industrial compensation claim, no doubt. We’d be in a sausage machine, minced up in little bits, with not enough confidence or creativity left to do anything. Alternatively we might have retired to some idyllic factory where we can crank out carbon copies of previous old hits to keep the machine going, but that’s not how we work.

Do you think that’s a fate that befalls a lot of promising artists?
I think there is such a pressure from the machinery which is defined as corporate, but not necessarily corporate, this attitude that everything has to be focused to the nth degree and have to polish it up and present it in a sanitized form. There is such a heavy weight, it’s really difficult to fight against that. So unless you’re immediately successful with some formula that doesn’t fit into that at all and you get the fuel that you need to carry on being creative and experimental, I don’t think you stand such a good chance in that format.

The music industry is a bit annoyed about file sharing and ‘illegal downloads’. Where do you stand on that issue?
We tend to take a positive view on that. The negative view is that if everyone downloads music for free and nobody buys it, there won’t we any record companies. Actually record companies like Ninja Tune, and indeed Warner do have a role in helping an artist get to a stage where they can afford to make music and put it out. However, the criminalisation of people sharing music doesn’t necessarily help anybody, and from our point of view there must be millions of people around the world who have never heard of Ninja Tune, and if a few of the get in contact with the Ninja virus through downloading music and get the bug for it, then it helps us. We’ve still got room for growth. That old economic model of scarcity is being replaced because the digital product implies a whole new economic model. I think that a model where all the manufacturers who are involved with delivering music in one form or another should receive some kind of fee for that. If it’s music on your phone or whatever, you would pay for it in the context of your mobile phone bill or your ISP bill. You should have access to all of it, and one would hope this would be a much fairer system. The current system doesn’t really work.

You’re both family men. How is balancing family life with being on the road and in the studio?
It’s kind of tough. My girlfriend would like to be on the road, she sees it a quite glamorous. I try to explain that you often don’t get to see very much and it’s usually quite grimy. I miss my son who’s going to be 10 years old. I’ve just been enjoying time with him more and more as he’s gotten older, and he misses me as well. I’ve explained that this year we’ve got to knuckle down and tour relentlessly, but in the future I hope to have him with me and be a part of what I do, if he’s interested.

Is he showing some interest already?
Oh yes, he’s got the confidence to be a vocalist. We had our first jam the other day, with him playing drums, and me playing bass.

The visuals are obviously very important in your performances. What do you think the visuals add to the experience of witnessing Coldcut live?
I think the visuals are the experience. It’s the combination, the synchronicity of the audio and the visuals that people find interesting and entertaining, and moving as well. The visuals are an intrinsic part of it. They stem from our idea that electronic music needs to be brought alive and performed in a different way to rock. Back in the 60s the sound and lighting got equal billing, sometimes better billing than the artist, like Jimi Hendrix with Joshua Light Show, Son et Lumiere which was a big thing in the 40s, 50s and 60s. They’re all good ideas which entertain people but haven’t really been taken up by the rock posse, it’s beginning to now, but normally you’ve just got drums, bass, guitars and some scruffy clothes. We’ve realised that we’re montage artists, as we discovered the more historical context of what we do.

Do you see yourselves moving more towards the more artistic side and away from the DJ side?
I think so. Coldcut mix things, and we mix the definitions as well. We’re not DJs, we’re not producers, we’re not rock stars, we’re not technicians, we’re not teachers, but we are parts of all of those things. We’re jumping out of one box into another to see what happens. Also, the idea of mixing people and machines is part of what we do. If it’s just machines making all the noise, there’s not much room for people, and we want to make people music; folk music, it’s folk music.

So would you call this the most organic album that Coldcut have made?
I would describe it as a mature cheese of an album [laughs]. It is organic. The presence of a note from a real double bass is something that can be felt, on a level where a sampler won’t quite do it.What is your favourite Bob Dylan song?
[sings] ‘Here comes the story of the Hurricane…’ I like that one. I think I heard it on John Peel or maybe on Alan Freeman. ‘Stuck Inside of Mobile…’ is good too. I prefer Arlo Guthrie though. Although I saw a documentary about Dylan where he was attacked for using electric instruments, and a lot of audiences didn’t ‘get’ it. It was quite encouraging really.