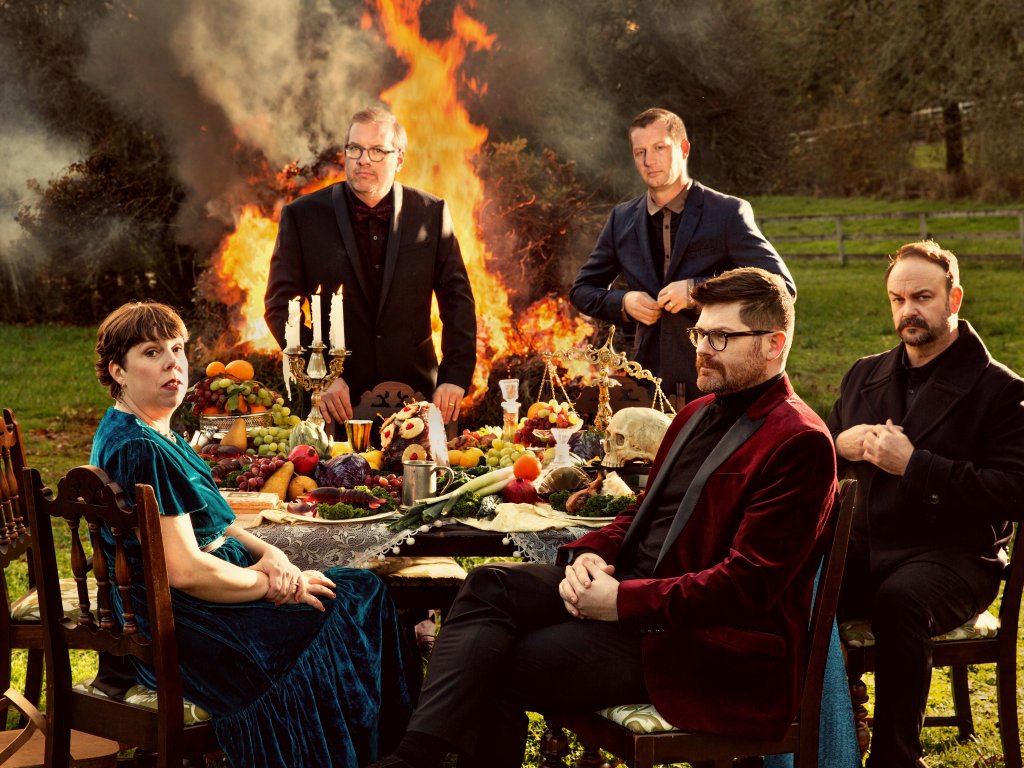 The Great White Wonder that is bootlegging

The Portland-based book-worms calling themselves The Decemberists have been the darlings of the (admitedly small) literary-folk-rock scene since their self-released debut Five Songs EP. The heady band of players, led by the surprisingly unpretentious Colin Meloy, managed to get themselves signed to Kill Rock Stars and release 3 LPs in as many years, as well as another EP. Although constantly enduring comparisons with Neutral Milk Hotel or Belle and Sebastian, they do produce a sound that is very much their own, indeed, they appear to inhabit a world all their own, founded on what appears to be obscure pastoral literature along with a penchant for Dylan Thomas and John Fowles. We managed to get a few words in edgeways with Mr Meloy and demanded to know…

…where did your encyclopaedic knowledge of Morrissey B-sides come from?
It came from a youth of just being absolutely obsessed with him. I think it had to do with growing up in Montana and getting hold of the singles was such a massive task, so it made the challenge more interesting. From about the ages of 16-20 I managed to collect all of the imports and singles of his solo career. Then I loved the b-sides as much as the a-sides, and I thought they should get their due. That’s where the tribute record came from.
I still have all those record. Although, after ‘Southpaw Grammar’ I though that I had bought my last Morrissey single, but then, recently he’s done it again. And I’ve had to run out and keep collecting.

Morrissey was the archetypical outsider. Do you relate to this sense of being on the fringes of the mainstream?
Yeah, to a certain degree. I think that’s where I’ve seen us lying. I think that we doggedly do music that we will do. We are a band that will definitely do things on our own terms. Necessarily, that means that we will not appeal to everyone, we will turn some people off. But I think that the people who do grab on to do get really attached.

Are the literary references partly designed to encourage the listeners to read a bit more?
I don’t think so. If it does lead to them reading more then that is a good thing, but I never want to be on a soapbox saying that people should read more and watch less television. That is not what it’s about. I do it because it is interesting for me to bury these little references in the music to be discovered later. I’ve always loved that about the music I listened to, like The Smiths or Robyn Hitchcock. I’ve always appreciated those little subtle hints and nods to books.

‘Picaresque’, sounds a bit more ambitious than the early albums. Did you approach it differently?
We did set out to make it a little bit more ambitious, to set our standards a little bit higher. A lot of it came from conversations I was having with Chris Walla right before we started recording. My thought was to try to make the record that we had always be meaning to make. I know everyone says that every time they go into the studio, but we didn’t want to vary the formula too much. I think there was certain things that I wanted to try to accomplish with this record that I had tried with other records but had fallen short because of lack of time or resources. With this record we had the freedom to move around a little but, to do what we wanted and to take any sorts of risk that we wanted. It was a longer recording process than we’ve ever been used to, and as a consequence I feel it is a fuller, more fully realised record.

The album contains quite a few political undertones. Are there very strong political feeling in the band?
Well, we’re not pundits, but we certainly have our opinions, and with recent events those opinions may have boiled up to the surface a bit. So I guess we do consider ourselves political, but I would never use my platform as a musician to trumpet my beliefs. The song ’16 Military Wives’ is not necessarily me trying to rally people to arms to overthrow the government, it’s just me trying to make sense of the situation.

Do you feel that the disposable pop-culture is destroying people’s capacity for imagination?
No, because that’s just the mainstream, and whatever is happening in the mainstream will inspire something to react against it. I’ve always firmly held that the more powerful the mainstream becomes, the more power it feeds to the underground. I assume you are referring to the ‘American Idol’ type culture?

Yes, but also society’s over-consumption of so-called ‘low culture’ and the shortening of attention spans.
I think there are things being killed on a daily basis that we may never retrieve, but I think it is inspiring a kind of reaction, and I think there is a solid underground of people who arte interested in making music to challenge the listener. I think it means as much good as it does ill.

The original Russian Decembrists failed in their coup because the did not succeed in connecting well with the mindset of the proletariat. Are you sometimes anxious that the obscurity of your allusions may have the same effect?
Err…say that again.

Perhaps your music is perhaps not connecting as it should?
I think my job, if I have a job, is not to kowtow to the audience. I think songwriting and performing is 50% reaching out to the audience and 50% making them reach out to you. I am not interesting in handing ideas on a silver platter to an audience. There is a certain amount of work required. I don’t mean this whole idea that you have to have a dictionary with you when you listen to The Decemberists, I don’t agree with that, but just to have the music challenge and stimulate you, it does require a bit of energy on the part of the audience. Inevitably that that is going to turn some people away, but it’s also going to bring people in who are interested in that stuff.

Are you surprised that it has taken so long for you to receive more recognition on the European indie scene?
Well, we just haven’t been over that much. Our energies have been focused on making records and touring the States. This was necessary because this is our main source of income now. We were over here in the Fall, and it was difficult because in the States we were used to a certain standard, and coming over here was like time warping back two years. But I think of it as a frontier that we are ready to attack. The times that we have played here, the audiences are really amazing and the approach of the people is so different than in the states, more receptive. It is potentially a really loyal crowd of listeners.

Why do you think the Europeans are more receptive?
I don’t know. We played in Germany, supporting ‘Cake’ and they have their own audience in place, and a lot of songs that people love. In the States, no-one would give the time of day to a supporting band, so when we got on stage we expected to be playing to have the capacity, just chatting amongst themselves. But when we got on stage we found that everybody was there and paying attention and responding.

How would you describe the typical Decemberists listener?
I usually describe them as disgruntled literature students and struggling actors. But that might just be my imagination, how I interpret things when looking out on the crowd. We have people from all walks of life, we have children coming to the shows. I think that there is something in the music that interests kids, even though it is pretty dark material. Parents are introducing it to their kids in a fairytale way. Then we have hipsters. It runs the gamut.

The theatrical element is obviously important to you. Are people only getting half the story if they don’t see you on stage?
No, I think the record speak for themselves, and coming to a live show is a different thing altogether. I always anticipated that we were going to be a studio band. A lot of our interest lay in arranging, and I thought that we would forever be stuck in the studio trying to work out these epic, cinematic arrangements. But in fact,. I think we’ve been able to bring them alive on stage. They are two mutually exclusive things. The live performances are an offshoot of the record. Having said that, the live shows have started to take on a life of their own, especially in the past year we’ve really started to get our stage legs, and feel more comfortable. The rule of Decemberists show is that anyone on stage is allowed to do whatever they want whenever they want., so it makes for an interesting show.

What are you reading at the moment?
I just finished that Johnny Rogan biography of Van Morrison, which was really interesting. I’ve always been curious in his life. At the moment I am reading ‘In Patagonia’ by Bruce Chatwin.

So where do you see the next record heading?
That, I don’t know. I’m still trying to figure it out. It’s the kind of thing that juts gets revealed to you. I feel that we did do something on the last record that satisfied me, and I am ready to trying something different. There are a lot of ideas pushing around. We recorded this EP called The Tain in 2004, which was just one 18-minute song, that draws a lot from an 8th century Irish poem, but also draws a lot from that history British folk-rock revival, and later prog-rock: Think that style of narrative, those bands attacking these old ancient stories with rock, that’s where I want to be pushing.

How accurate do you think these constant comparisons with Belle & Sebastian are?
Well I would certainly cite them as an influence, but I hear that comparison much more in Europe. In the States, they tend to pull out Neutral Milk Hotel as comparison. I don’t really agree with it. It’s probably all Pitchfork’s fault. (laughs) God damn them!

Finally, what is your favourite Bob Dylan song?
It was one from the ’66 Royal Albert Hall shows…’Visions of Johanna’ that’s a good one.

The Great White Wonder that is bootlegging