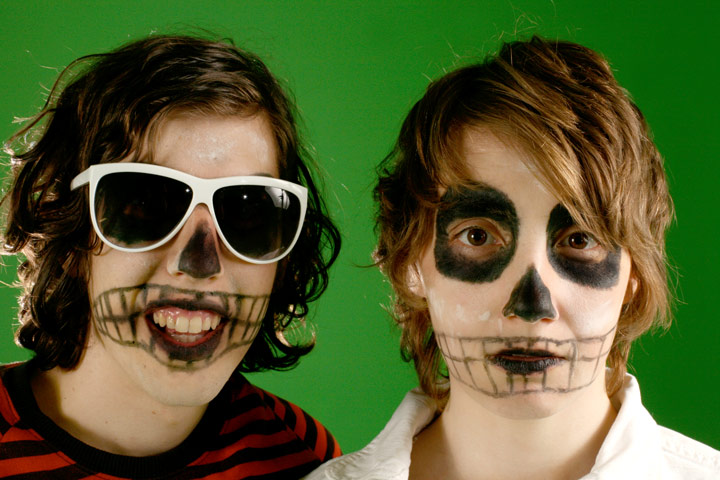 How is the tour going?
It’s going really well. I’m having a nice time. We started in Spain, then we went to Scandinavia and now I’ve been doing Germany and France. I’m out with my girlfriend and we really loved Spain and really missed it the whole time, like we keep wishing all the time that we could just go back there. But we’ve been ok, we ‘ve made the best of it!

You just played in Berlin last week and you are going to repeat here tonight, have you prepared anything different for tonight’s show?
No and I feel bad. I’m definitely going to play some of the songs I didn’t play that night and I think it’s more like a dance party probably tonight, I’m guessing, but I mean I like to talk a lot and it’s never that much of a dance party when it’s just me… I’m a little bit too tired to prepare anything new, but I learnt German while I was away and I’m going to do the whole show in German actually!

Apart from musician, you are also a visual artist. Do you usually add visual things in your shows?
I have sometimes. I’ve been for a long time working with music and then also working with visual art, like sculpture, drawings and video things. I’ve been many years trying to find ways to combine those, but sometimes it’s just not possible. Sometimes you just have to work so hard to make the music work right that you don’t even have the attention afterwards to add the visuals. Optimally, my dream of what I would like to get to is making some performance that’s really visual but in a really simple way, because sometimes a video can be overwhelming, like everybody looks at the video and not at the person on the stage. I’ve used that to kind of thing to hide behind the video, but I’m now trying to find the way to make it possible to be on the stage and have myself be visible as well as whatever other visual elements.

What about the covers, do you design them?
Yes, the last two records I did together with Jona, but before of that I made them all myself.
How is it when Jona is there for the shows? What is different? What does he add?
We haven’t toured together for about a year. We just stopped touring together because he started to work on his own band more. When he was on stage it was awesome, it was like a dance party, really loud and fun, really sweaty. It was different, it was like more wild when he was on stage. But optimally I think that for him is more worth to do his own project things, where he gets to sing, he creates the songs and he gets the main character on stage. He mostly was operating the computer and pumping up the crowd. It’s just different now.

Have you ever done any acting?
Me? no never.

What about that Pop Opera project?
Pop opera? Well it was something I performed as the Blow style, but all the talking that I did in between the songs I did it as a different character from myself, like a younger girl, and then all the songs where also from her perspective, she was telling her story. It became obvious, although some people didn’t realised it wasn’t myself, but it was obvious that it was a story that wasn’t really true.

What’s your art then about?
Well, I’ve done lots of different little things that I also like to fit together and I’ve definitely done visual art that’s about how I think relationships are, but it’s more abstract. For example, I made some lamps, they were like illuminated sculptures. I made them up with folded little pieces of paper and with those sculptures I was thinking about the way that you can see a person’s personality. The way that you can feel love from them and how some people really shut down in certain places but if you get them from a certain angle you’ll see their tenderness, whereas other people are just totally open and come from every different angle. It was about all the different ways you have to go through people to get to their sweetness, about the different points of access that people have. It’s really cheesy if you talk about that, so it’s better if I don’t, you have to see it and to feel it, but I definitely was thinking in some people that I knew when I made certain lamps. I made one of them thinking in someone that I really loved and found really amazing and when everyone looked at it said “that’s the one!”, like they could just feel the feeling coming out of it.

Do you still work on visual art while you are touring or composing music?
I honestly have spent more time on music recently than I have on other works and I want to take a break from making music for a while, because I’ve been touring for a year and I just need to go home and take a nap! Make some sculptures and stuff… just like recharge. I mean, I want to keep performing but I need a little rest. So we’ll see what I do then.

I’ve heard you speak a lot of foreign languages; can you tell me which ones?
I speak Danish, Spanish and like a little bit of French. I’ve done shows in French and people understood what I was talking about, but I’m not as good at it as I am in Spanish or Danish.

Why did you choose to learn those languages?
I was an exchange student in Denmark, like 14 years ago, and then I fell in love with someone from Spain while I was in Denmark, so I learnt Spanish to be able to talk to that person.

What do you like to listen to when you are at home or touring? I’m very curious because when I listen to your music I can think of a lot of very different influences.
That’s nice, that’s a very good compliment, thank you. I don’t listen to music that much and don’t know that much about music. A lot of times when I’m touring I just listen to the radio, because I would like to bring CDs but I just don’t happen to have any. Yesterday we were listening to the German radio stations and it was Gwen Stefani, that new song she has like “duduuu ooh”, then we went to a hill and the frequency changed, we went to another station and it was something really different that went like “liruliruliru”, like really oddly, that kind of thing can be really influential for me, even those weird things juxtaposed. But I listen to a lot of classic rock on the radio too and I listen to people that I meet when I’m on tour and to friends of mine. I like Final Fantasy a lot, from Canada, and Julie Doiron, I’ve just played a show with her and she gave me some CDs and I listened to her, she is Canadian too. I listen to a lot of Canadians actually, turns out.

How is it like living in Portland? Do you have the feeling that there’s like a huge music scene there or is it just something the music press talks about?
I lived in Olympia, Washington, and I had that feeling a lot more about Olympia. Downtown there is just 1km away and you just would see all the bands, like one day The Gossip was playing and the next day Mirah was playing. Even on the same night there were multiple really amazing concerts. Portland is just a bigger city and there are different scenes that I’m not really a part of. There are so many people that I don’t really know them. But it feels like a really exciting place to be, there’s a lot of young people. I was asked recently in an interview about the Portland music scene and I was like “Who are the bands? I don’t know”, the Shins are from here and the Decemberists are from here, but I don’t know them. The bands I know are more the bands I’m working with, like Mirah and Yacht. But maybe it will change this summer and I get to know everybody!

You like to interact a lot with the audience, have you found any differences between the audience in the US and in Europe?
I really think that every city is different. In the US I played in Minneapolis multiple different times and they are really open and like really philosophical. I went on a tour there with Calvin Johnson and we did a lot of weird stuff. Every night we would open up a question time and said “Ok, if anyone has a question you can just now ask us”. You can tell a lot about how the audience is by what they ask, or if they ask nothing, and someone in the audience in Minneapolis just asked “What is?”, like a deeply, philosophical question. Other times I stayed in Minneapolis I had the same feeling that it is very psychedelic and super open minded, they like to watch everything. It’s like different feelings. Stockholm, for example, was really, really fun and the whole audience was filled with just every kind of people, like rockabillies, and hard rockers, pop people and nerds and everybody was having a really good time together dancing. People have different styles in different cities, you can’t even generalise by country. At first I kind of though that German audience is really cold and hard, but in Stuttgart, for example, they were really warm from the beginning, they were just standing there and smiling at me.

And last question, where did you learn to dance like that?
I don’t know. I never could actually dance when I was a kid. I never though like I could and my best friend she could do everything. When I was 17 or so I was so jealous she could dance so good and she once said to me “You know, I practice. Maybe you should practice too!”